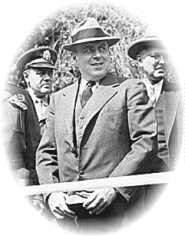 and the ATOMIC BOMBING OF JAPAN


John McCloy was appointed Assistant Sec. of War on April 22, 1941. During the Spring and Summer of 1945, McCloy spent most his time working on issues involving postwar Germany. But McCloy was energetic and got involved in much of the War Department's business. Sec. of War Henry Stimson wondered "whether anyone in the administration ever acted without 'having a word with McCloy'." (Henry Stimson, McGeorge Bundy, On Active Service in Peace and War, pg. 343). With the 77 year-old Stimson in declining health, McCloy's workload and knowledge increased.

He was present at some of the most important government meetings in 1945, including the discussions by the Committee of 3 (Sec. of War Stimson, Sec. of the Navy James Forrestal, and Acting Sec. of State Joseph Grew) of how to get Japan to surrender.

McCloy startled people at the important June 18, 1945 meeting that President Truman held with the U.S. military heads. It was at this meeting that Truman approved an invasion of mainland Japan, scheduled for Nov. 1, 1945. When Truman asked McCloy if he had any alternative to an invasion, McCloy didn't hold back:

"...we ought to have our heads examined if we don't explore some other method by which we can terminate this war than just by another conventional attack and landing." (Herbert Feis Papers, container 79, Len Giovannitti and Fred Freed interviews, Library of Congress).

Truman asked what McCloy had in mind; McCloy offered his ideas for obtaining surrender by diplomatic methods:

"Some communication to the Japanese government which would spell out the terms that we would settle for -- there would be a surrender: I wouldn't use again the term 'unconditional surrender', but it would be a surrender that would mean that we would get all the important things that we were fighting for... if we could accomplish our objectives without further bloodshed, there was no reason why we shouldn't attempt to do it...". (Herbert Feis Papers, container 79, Len Giovannitti and Fred Freed interviews, Library of Congress).

McCloy proposed that the U.S. remind Japan of our great military superiority, and that we would "permit Japan to continue to exist as a nation..., that we would permit them to choose their own form of government, including the retention of the Mikado, but only on the basis of a constitutional monarchy...". (Herbert Feis Papers, container 79, Len Giovannitti and Fred Freed interviews, Library of Congress).

Then McCloy dropped an even bigger bombshell:

"I had raised the question whether we oughtn't to tell them that we had the bomb and that we would drop the bomb. Well, as soon as I mentioned the word 'bomb' -- the atomic bomb -- even in that select circle... it was sort of a shock. You didn't mention the bomb out loud... Well, there was a sort of a [gasp] back at that." (Herbert Feis Papers, container 79, Len Giovannitti and Fred Freed interviews, Library of Congress).

McCloy later wrote that "everyone was so intent on winning the war by military means that the introduction of political considerations was almost accidental." (John McCloy, The Challenge to American Foreign Policy, pg. 42).

Truman told McCloy to take his ideas to the State Department for consideration. James Byrnes, who would soon become Sec. of State, rejected McCloy's ideas. So the Committee of 3 took up the issue of how to convince Japan that it was in her own best interests to surrender. They appointed McCloy to a committee that would write the proposed surrender demand. The document came to be known as the Potsdam Proclamation because it was issued during the Potsdam Conference in Germany.

The Potsdam Proclamation was given to Truman by Stimson on July 2, 1945. Included in the Proclamation was a line that Stimson told Truman "would substantially add to the chances of acceptance" of surrender by Japan. The line said:

"This may include a constitutional monarchy under the present dynasty if it be shown to the complete satisfaction of the world that such a government will never again aspire to aggression." (U.S. Dept. of State, Foreign Relations of the U.S., The Conference of Berlin (Potsdam) 1945, vol. 1, pg. 892-894.)

However, that line was removed from the Proclamation by President Truman before it was issued on July 26, 1945. It cannot be known whether the inclusion of that line would have led to surrender by Japan. But Stimson and McCloy were certainly correct in their realization that the emperor was a critical issue for the Japanese.

To the end of his life, McCloy felt "we missed the opportunity of effecting a Japanese surrender, completely satisfactory to us, without the necessity of dropping the bombs." The use of nuclear weapons on Japan "was not given the thoroughness of consideration and the depth of thought that the president of the United States was entitled to have before a decision of this importance was taken." (McCloy quoted in James Reston, Deadline, pg. 500).

Kai Bird, The Chairman: John J. McCloy: The Making of the American Establishment

Len Giovannitti, Fred Freed, The Decision to Drop the Bomb; [contains some of the material in the above mentioned Herbert Feis papers]

James Reston, Deadline; [particularly the Appendix, which contains an article by McCloy on the atomic bombing of Japan]

To return to the Who's Who and What'd They Do? index, click Who's Who (http://www.doug-long.com/who.htm)

To return to the Hiroshima: Was it Necessary? home page, click Home Page (http://www.doug-long.com)