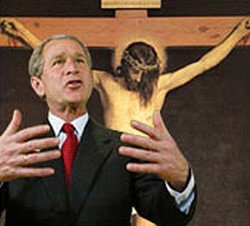 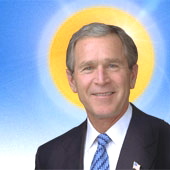 (As revealed to Doug Long)

BLASPHEMY! It is my sacred appointment to warn you of the false witness that has been born upon the words of our Lord Jesus Christ! These foul fabricated fables were foisted upon us through the ages by none other than the same liberal media that dominates all we see and hear today. And they have used the Bible to do this! They have misunderinterpreted the Gospel, and it's enough to make me go nucular. Verily, they have turned the Revised Standard Version into the Revised Slandered Version.

It is only in recent years that the real Gospel has been divinely revealed unto us. It is The Gospel According to Bush. George.... uh, I mean, JESUS - commands, and I must obey. Let us worship the Prince of Power. I will now set the Gospel straight, ridding it of the liberal bias that has been a plague upon us for lo these 2000 heathen years. For unlike Matthew, Mark, Luke, and John, the Gospel according to Bush makes NO mistakes.

Below are listed some of the most sacrilegious liberal distortions of the Gospel, and under those falsifications are listed - in royal purple - the true and only Gospel - according to Bush. Join us in our War on Errorism!

"Blessed are the meek, for they shall inherit the earth."

"Blessed are the rich, for they control the earth ." I mean, we're talking about Gawd ALMIGHTY here, not some loser Democrat.

"Blessed are the peacemakers, for they shall be called sons of God."

"Blessed are the peace breakers, for they shall be called the Coalition of God."

"You have heard that it was said, 'An eye for an eye and a tooth for a tooth.' But I say to you, Do not resist one who is evil. But if any one strikes you on the right cheek, turn to him the other also"

"If there is a chance that maybe someday someone you don't like may possibly strike you, smite them down with shock and awe, especially if they are much weaker than you. And if you happen to torture some people and kill a lot of families, oh well..."

"Give to him who begs from you, and do not refuse him who would borrow from you." 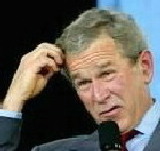 "Do not give to him to begs from you. This will only discourage him from looking for a low wage job. Do not refuse him who would borrow from you, but charge him the highest possible interest rate that the market will allow."

"You have heard that it was said, 'You shall love your neighbor and hate your enemy.' But I say to you, Love your enemies and pray for those who persecute you"

Who in Jesus' name would say that kind of liberal crap!? Let's get rid of this liberal revisionism right now:

"You have heard that it was said, 'You shall love your neighbor and hate your enemy.' Well, they were right. Except, I'm not so sure that some of our neighbors deserve our love. So let's just stick with the 'hate your enemy' part." 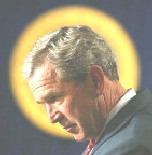 "When you pressure children into praying in public schools, let your prayer make no reference to religions or philosophies that do not support Christian fundamentalism. And let the child who refuses to pray be banished into the land of the C minus students who can't get into college. For they would only become liberal college professors and intellectuals, anyway."

"No one can serve two masters; for either he will hate the one and love the other, or he will be devoted to the one and despise the other. You cannot serve God and mammon."

This is quite misleading, because it neglects to mention the long lost verse that comes next: "Because your job is to just serve yourself. Serving both God and mammon is the job of your multi-tasking employees. By the way, shouldn't you lay some of them off today?" 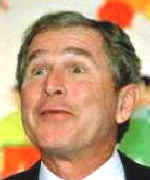 But they left out the next verse - the most important one:

"So worry not your little head about the environment, but let the corporations do what they will to the food you eat, the water you drink and the air you breathe."

"Judge not, that you be not judged."

"Judge unto others, before they judge unto you."

"So whatever you wish that men would do to you, do so to them; for this is the law and the prophets." 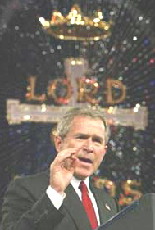 Ah, now that one's in the Gospel according to Bush.

Now what kind of "family values" is that? Here's what Jesus really said:

"Come to me, all who labor and are heavy-laden, and I will give you rest."

Mollycoddling liberals. The verse should read, "Come to me, all who labor and are heavy laden, and I will outsource your jobs." Yeah - then they can rest!

"Jesus said to him, 'If you would be perfect, go, sell what you possess and give to the poor, and you will have treasure in heaven; and come, follow me.' When the young man heard this he went away sorrowful; for he had great possessions." 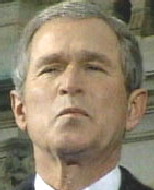 "Jesus said to him, 'If you would be perfect, go, buy low, sell high, and you will have treasure. Then lo - once you have treasure, I shall cut your taxes. And thou shalt dump your debts on the poor and the middle class forever. Amen.'" 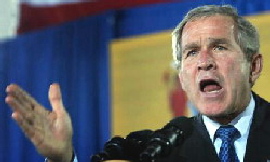 "Then Jesus said to him, 'Put your sword back into its place; for all who take the sword will perish by the sword.'" 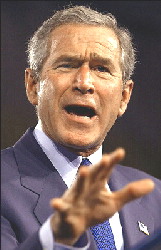 "For what does it profit a man, to gain the whole world and forfeit his life?"

"For what does it profit a man if he gains the whole world? Quite a bit, actually - and tax cuts, too!"

C'mon, that's not even IN the Gospel of Bush! IGNORE! IGNORE! Let ignorance be your guide!

"And he lifted up his eyes on his disciples, and said: 'Blessed are you poor, for yours is the kingdom of God.'"

"And he lifted up his eyes on his disciples, and said: 'Blessed are you rich, for yours is the kingdom of Earth'."

"But woe to you that are rich, for you have received your consolation." 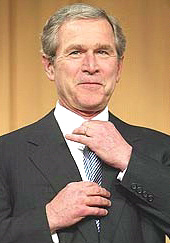 "But woe to you that are poor, for - well, because you're poor. That's pretty woeful, really."

"If there is no speck in your brother's eye, then why not put one there? Find his strength and tell people 'This is my Brother's weakness'. For lo, there could not possibly be a log in my own eye. And as you shall say, so shall people believe".

"Sell your possessions, and give alms; provide yourselves with purses that do not grow old, with a treasure in the heavens that does not fail, where no thief approaches and no moth destroys. For where your treasure is, there will your heart be also." 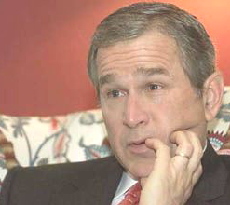 But they left out the small print: "These sacred teachings shall apply for only one hour each Sunday morning in church and shall in no way affect or interfere with any business dealings. Lo, verily! - business people shall feel free to utterly ignore, yea, even contradict the above mentioned sacred teachings."

"But when you give a feast, invite the poor, the maimed, the lame, the blind, and you will be blessed, because they cannot repay you. You will be repaid at the resurrection of the just."

"But when you give a feast, do not invite the poor, the maimed, the lame, the blind, and you will be blessed, because those folks cannot repay you. You will be repaid at the re-election of us." 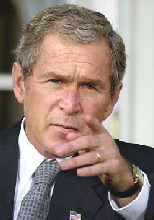 "This I command you, to love one another."


Now that you have seen the distortions of the word of our Lord, you know the depths to which some people will stoop. Why - it's BLASPHEMY! 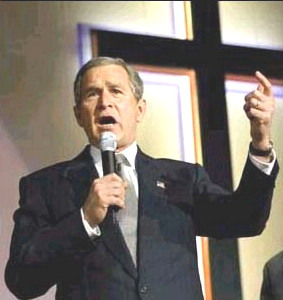 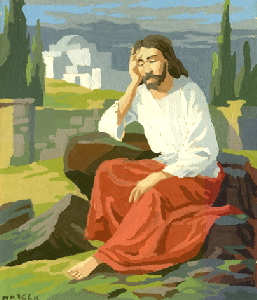